When I first moved and got my car a year ago, I really missed the aux input in my old car’s stereo.  With an aux input, I I used to plug my iPod in and listen to podcasts, and it made my commute anywhere productive.  In addition, since I had my music library on my iPod, I never had to switch to CDs or radio for music when I had friends in the car.  I figured that when I was finally settled in from the move, I would go ahead and get a stereo with an aux input installed.  I decided it didn’t make sense to dedicate any effort to that task until I had my job, apartment, etc squared away.  So I would make do temporarily with the stereo that came in my car, and shortly after I would replace the stereo.

Working Around a Poor Solution

At first, I didn’t mind at all, since I intended to replace it shortly – and then I started accepting the lack of podcasts in my car. Even after I was settled in for for a couple months I listened to the radio and my CDs.  This bothered me a little since I couldn’t listen to podcasts, but I came up with a workaround.  While I listened to music in my car, I started listening to my podcasts when I ran.  This affected my running (since I can’t focus 100% on running at the same time I’m processing technical discussions), but it was a reasonable compromise to make sure I still had a chance to listen to the Java Posse.

After a couple months I was tired of my radio stations and the old CDs in my car.  My dad had an extra FM tuner for my iPod that he asked me to try out.  I’m usually against FM tuners as I don’t like the sound quality, but I decided why not – it was free, and I just had to plug it into my cigarette lighter.  As expected the quality wasn’t great, and occasionally I would lose a few seconds of audio – but on the whole it was acceptable enough.  I was able to focus on my running again with high energy music, and I could now listen to my podcasts in the car. I decided this was another temporary solution, and figured soon enough I would get around to purchasing a car stereo with an aux input – once again, it didn’t seem like a high priority, it was just a luxury.  I was flat out procrastinating at this point.

Another Better (but Still Subpar) Solution

A month or two after using the FM tuner, I was getting irritated that it kept cutting out, and also the volume on the transmitter was really low.  I was about to remove it from my car (which would have forced me to go get the aux input dealt with) when I thought – what if I hang my iPod up to extend the antenna?  The FM transmitter connects to the iPod via a cable about 3 feet long that also doubles as an antenna, and was long enough to reach the roof of my car.  I hung it up on my passenger side visor/shade, and the sound quality improved maybe 20%.  It wasn’t a dramatic improvement, as it was still soft and I had to turn up my stereo.  The biggest improvement was that at least now I no longer had seconds of audio being dropped.

The Moral of the Story 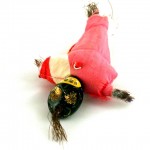 It has been a few months now, and I am not sure if I will even get the aux input, since I can make do with the FM transmitter quality when I hang it up, which irritates my passengers – but if they want to use my/their iPod, that’s the sacrifice that has to be made.

So, what’s the moral of the story?

NO! The moral is Beware The Curse of the Worst Acceptable Solution!

I think it’s time for a graph:

As you can see, at each stage the subpar solutions I chose were first barely above my acceptance threshold. Over time, I grew tired of them and the minor irritations I formerly accepted were things I no longer wanted to put up with.

As each solution slowly became more unacceptable to me, I would switch to the next solution.  I finally ended up with the FM tuner hanging off my visor, which is barely acceptable, but does not bother me enough that I will change it yet.

Why Do We Accept The Worst Acceptable Solution?

Ok, so the next obvious question is – if the aux input solution is so superior, and I recognize it is superior, then why haven’t I implemented it?

And the answer to that, is what causes us to succumb to the worst acceptable solution – laziness, and the tendency to implement the least difficult, acceptable solution – which, very generally speaking, is also the worst.  At each stage of this, I had the opportunity to choose a superior long term solution, but I always put it off in favor of laziness, and implemented the solution with the lowest marginal cost (in this case, cost is measured by effort to implement the solution, not money).  It was easier to use CDs than to get my aux input, and certainly easier to just use the FM transmitter I was given than to replace my car stereo.

Thus, even though in the long run I would be better off just purchasing the aux input, at each decision point I chose to implement the easiest solution over the super solution, because a better solution would require more effort.

How to Cure Yourself

Some people may not want to be cured – they’re perfectly to have the worst acceptable solution.  After all, you’re implementing solutions that are functional enough, and ultimately solve the problem.  I would argue however, that it’s better to do more than just solve the problem with a solution that is good enough – we should solve the problem in a way that maximizes our utility over the long run.  So, here are some ways to evaluate solutions:

I think it’s human nature to want to take the easy way out when given multiple options, provided that either solution is acceptable to solve the problem.  While in some cases this can be sufficient, I recommend approaching problems and trying to solve them in the way that enriches your life the most, and provides you with the best experience possible.  Of course, as Barry Schwartz discusses in his book The Paradox of Choice: Why More Is Less, we don’t always know what we want or what will make us happy.  I’ll leave that discussion for another time =)