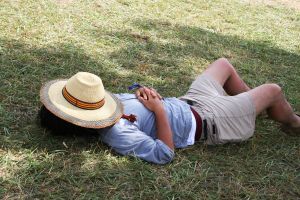 “Every vice has its excuse ready.”
–Publilius Syrus

Let’s dive right into some of the most common procrastinati0n excuses I hear – and well, also excuses that I’ve made.

The grand daddy of all procrastination excuses.  So seductive, because there is a little truth to it.  We don’t have to do it, although we may suffer a bit down the road.   That’s just a risk we take…right?

When we make this excuse, what we’re really saying is – “I don’t want to do this, and I’m secretly hoping that it’ll either go away, or I’ll eventually feel motivated to actually do it.” Many of us use this excuse knowing full well we’re procrastinating – waiting for that excitement and adrenaline rush that’ll push us through that all-nighter, and “successfully” finish on time.  Other common phrasings include “There’s plenty of time” and “I can always do it tomorrow.”

Sound familiar? I know I’ve been there. Some of my favorite examples of this excuse include “I’ll start…” –

This is procrastination, plain and simple – we don’t want to do the difficult tasks that we really should be doing, and we put things off by making excuses and doing “just on more thing.” Surprise, surprise – for me, that “one more thing” often ends up being one of my procrastination thumbscrews.

You know, sometimes it really isn’t the right time. If you want to take up cross country skiing and it’s the middle of summer, maybe you can wait until winter comes around.  More often than not though, it’s just an excuse because it’ll never be the right time.

Saying the time isn’t right is just an excuse we use to rationalize why we aren’t starting on our goals and dreams. We blame the situation – even though if we were motivated enough, we could make it the right time – right now.

“If we wait for the moment when everything, absolutely everything, is ready, we shall never begin. ”
– Ivan Turgenev

4. “It’s Not Really That Important”

Our goals and dreams either matter to us – or they don’t.  Too often, I’ve seen people start down a path on a dream that was truly important to them – and then get stuck.  They come to a bridge that is difficult to cross, and they get bogged down. Eventually, perhaps due to fear of failure, perhaps laziness, or just plain unpleasant tasks, we rationalize that our goals were not really that important – and put them off.

3. “I Don’t Have Enough Information To Start”

This often starts off well meaning enough. Say you’re looking to lose some weight.  You know that the smart thing to do is to get some nutrition advice, so you read books and start researching. That’s where the trouble begins – perhaps your goal now starts to look difficult, or you’re unsure of what to do.  You started out with some responsible metawork – but over time, that eventually becomes the scapegoat for why you never begin. You may not actually even be researching anymore.  A second option, which may be even worse, is you stop actually learning anything new, but continue reading anyway.

Gathering information in this way, without actually putting any of it to use  is just entertainment masquerading as planning.

Sometimes this is a legitimate excuse. Many times though, this is just a convenient scape goat we use when we’ve perhaps gotten to a point where we’d like an easy way to toss a project on the back burner – perhaps indefinitely.

Remember – most people who accomplished their goals didn’t have the luxury of an uninterrupted life.  In my own life, for example, many times I’ve been derailed from my goals (such as by appendicitis) – but I try to quickly get back on track as soon as I can.  I still catch myself making this excuse from time to time though!

This is one of the sneakiest, most dangerous excuse traps we fall into.  We get busier and busier, and then one day we put off working on an important task or goal.  That one day turns into two days, into weeks, months – and even years. We sit around waiting for someday, that elusive day when we’ll be less busy and can get to it.

The problem with this excuse is that it’s almost guaranteed that your mythical someday will never come.  You’ve seen me talk about it often when I discuss time management – as a rule, you probably won’t have more time in the future.  If you’ve got too much to do right now – you’ll probably continue to have too much to do, and in fact odds are next year you’ll be even busier than you are today.

Take a look at why you’re busy and ask yourself – are you doing some things that are not as important to you as the goals you’d like to work on?  Is it possible that perhaps fear of failure is causing you to use these lower value tasks as an excuse to put off what matters most to you?

And if you truly do have a lot of little things that you have to do all the time, perhaps it’s an issue of prioritizing – and you’ve got to separate the urgent from the important.

You don’t have to go it alone. If you are struggling with procrastination, feel like you always fall back into the same old routines: and want to finally make time to get the most out of your life, click right now to read the details about my course The Action Solution and see if it’s something you’d be interested in. It is the result of decades of experience, and hundreds of hours of working with real people – just like you.